The only thing I can find that might explain the choice of Auburn as Harry Connick Jr.’s alma mater in the 2008 romcom New In Town is co-screen writer C. Jay Cox’s writing credit on Sweet Home Alabama.

Maybe C. Jay, a BYU grad, was in Alabama scouting locations back in 2002, researching the culture. If so, then surely he heard about the good guys (because here he is in 2003 dressing like the bad guys) and maybe “Auburn” just stuck with him. 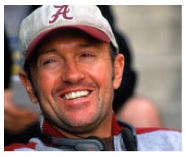 Or maybe the whole thing was just a fluke Connick Jr. ad-lib.

However it happened, when flannel-wearing factory union-rep (“This country was built by robber-barons!”) Connick Jr. finally gets quality time with rosy-cheeked, profit-driven blue-toother Renée Zellweger, the factory’s new, fresh-from-Miami manager, he reveals that the real reason he moved to New Ulm, Minn. was for easy access to the Mayo Clinic… and that can’t be good (can’t see the video? Try here):

If it was the video store Brenda ran out to, it probably wasn’t for this movie, at least judging by the reviews of people who watched it with more in mind than catching the Auburn reference (though catch it they did – “And to top it all off, Ted is — brace yourself — an Auburn graduate. Oh, Harry”). But hey – from what I saw, it’s quaint and formulaic and pop-cornable and you get to hear the great former SNL’er Siobhan Fallon make Minnesotans sound positively… I don’t know… Irish or something.

Thanks to Xavier Garanzuay for the tip.

If you know of any pop-culture Auburn references – movies, songs, books, whatever – drop us a line: [email protected]