Troy spokesman Ricky Hazel said Tuesday that the 29-year-old Brown, who led the Trojans to the third-best total offense in the nation this past season, will take over play calling at Texas Tech.

Changing Tech’s signature style makes no sense, and Tuberville’s suggested he wouldn’t. But even if you do the thing you probably shouldn’t and trash it in favor of an awkward transition period, the thing that makes even less sense than no sense at all is adopting some close-but-not-quite identical version of the spread similar to the one you couldn’t abide at your last job. Hell, reverting to a stodgy Tuberville style of I-formation running and floppy-haired, noodle-armed pageboy quarterbacks makes more sense that doing something the kids haven’t practiced and you don’t actually like.

Tubby’s relationship to the spread is like a devoutly religious teenager at his/her first semester at college: he wants to, but he  just can’t bring himself to go all the way. He brings Franklin in to run the spread at Auburn … but keeps all the position coaches so they can’t teach it or run it properly. Now he wants to keep Tech’s spread intact … but instead of promoting one of Leach’s assistants and trusting them to do the job, he brings in his own guy who will inevitably run something like Tech’s spread that will not be it.

That’s not to rule out the possibility that whatever the hell Brown runs will work. Troy was their usual explosive selves (No. 3 in total offense) and Franklin’s success at MTSU suggests that what they’re doing works when it’s not compromised by the presence of future trucking executives. But what Leach and his staff did worked just as well, and has the added benefit of neither requiring the players to adjust to a different system nor a new coach to adjust to theirs. Tubby appears to have once again looked at two different offensive philosophies for his team … and wholly committed himself to neither.

I’m hoping like hell I’m wrong, of course, because if the Tech offense can retain any of its current glory while Tubby brings the defense up to Tubby standards … look out. (We here at TWER do, of course, wish Tubby the very best of luck in particular regards to hiring Bad Lando to run his defense.)

More. For the definitive Tubby post here at TWER, I recommend former Lubbock resident Jeremy H.’s recollection of previous discussions of the fair West Texas city … with Tubby himself. Jeremy also posted his expression of love to various members of this 2009 team. To Darvin Adams:

(Y)ou look like a guy Cree Summer would have crushed on in A Different World but instead of protesting apartheid you get in the open.

One final self-site plug: today’s Daily Believer rocks, but then again, every edition rocks. Read it.

Speaking of Adams … you’d think professional journalists assigned to cover the SEC might notice things like “12 catches for 120-plus yards and MVP honors in 38-35 win,” but you’d be wrong. At least Phil Steele knows what’s up. (Note he had Ziemba on his first team, too.)

Co-sign. I greeted the news that Auburn would be playing Miss. St. on a Thursday night in Starkville pretty much the way I would word that one of our players had broken a leg. State is already terrifying enough with that ground game, jitterbug receivers, and Mullen in command; now we have to play them on the road on a Thursday night? Can we give them a 10-point head start, too? It’s stories like these for which God gave that JRS a blog:

when will big time programs ever learn to JUST SAY NO! to Thursday Night!?

all it means is you are gonna lose to an underdog on national tv and get beat up in the press over it. leave Thursday night to the Big East, ACC, and the Vandys and South Carolinas. i want nothing to do with that blackhole of college football upsets.

C’mon. Ben Tate was Auburn’s only initial invitee to the NFL combine, meaning Antonio Coleman’s invitation must have gotten lost in the mail or something, because come on. Honestly.

The blAUgosphere gets its hoop on. Lots of solid reaction to last Saturday’s men’s hoop catastrophe at Beard-Eaves:

— Jonesy at Section 13 provides a running diary, which must be more fun to read than the game was to watch

— As if the on-court problems, Jay Coulter has a story to tell regarding the purchasing of some Auburn basketball tickets:

During the holidays, I ordered four sets of the “Saturday Six Pack” basketball tickets from the Auburn ticket office for gifts. They never arrived. I drove over to the office four days before Christmas, but they were closed already for the holidays. Needless to say, I came up short on the gifts.

The story has a happy ending, kind of–the ticket office manager, Stephen Naughton, is so helpful Jay doesn’t even ask for a refund–but the big-picture irony here is that even the precious few Auburn fans who want to pay for basketball tickets can’t do so. What a mess.

(On a positive hoops note: KeKe Carrier was named the SEC Player of the Week. More than deserving.)

Next time. TWER Bowl Pick-a-palooza champion audashdriver had one request as a reward for his victory: a shout-out for the Auburn gymnastics team if they finally ended Alabama’s 98-meet head-to-head winning streak. This was the kind of request I would have been more than happy to fulfill … but unfortunately, the Tide stretched the streak to 99 despite Auburn pushing the country’s No. 3 team into the final event. At least there’s some good news: even in defeat, Auburn was impressive enough to move into the top-10 in the gymnastics rankings.

Etc. Some quality thoughts from Andrew Gribble regarding Chizik’s contract … Pete Carroll is a panda … Joe Auburn deals out some harsh grades to Auburn’s coaches for the ’09 season, then decides maybe a little bit of a curve is a good idea … and finally, I’m sure there’s a good number of you out there who remember the MTV series The State–as virtually any male who hit high school age in the early-90s does–which I received on DVD for Christmas and which I’m enjoying thoroughly. So I’m sure you’ll appreciate this bit of handiwork: 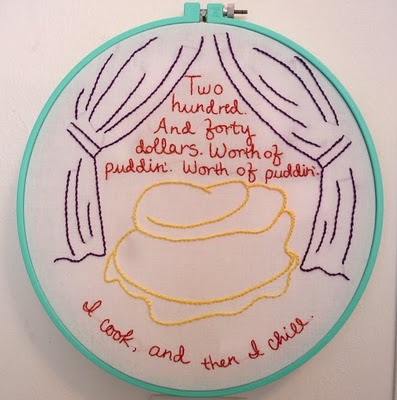