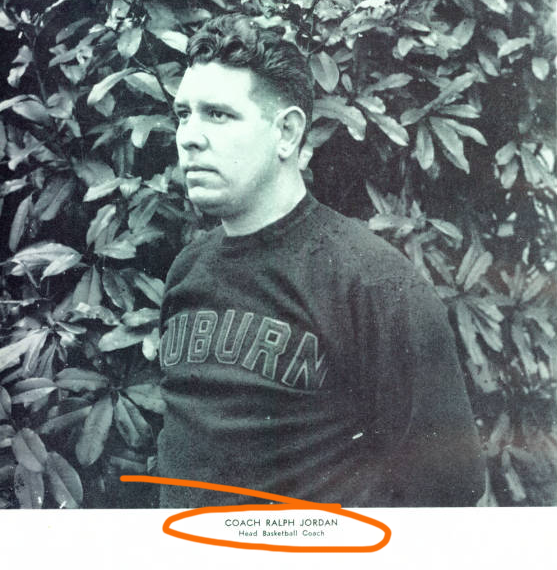 In his synopsis of Auburn basketball (included in a recent 40-team breakdown of the current season), ESPN.com columnist Pat Forde lists Shug Jordan’s 10 year stint as Auburn’s basketball coach (while he was also an assistant football coach) as a “clear sign of (Auburn’s) institutional indifference” toward the sport.

Which it might be, or have been… had our legendary football coach not also been a kick-ass basketball player.

In the 1929-30 season, in an era when teams might only combine to score 30 or 40 points per game (and when he was also known as “Lefty”), Shug racked up 112 points in 11 outings, the most of any player in the then Southern Conference.

Shug lettered in basketball, baseball and football in his four years as an Auburn student.

He was voted the school’s Most Outstanding Athlete as a senior in 1932.

The Glomerata from that year reads: “Lefty is truly one of the greatest forwards ever to don an Auburn uniform. His left-hand pass work has constantly proved a stumbling block for all Tiger opponents.”

Jordan’s overall record as Auburn’s basketball coach was 88-66. In his last year – before heading off to freaking D-Day – he took us to the semi-finals of the SEC tournament, where we beat Vanderbilt and Tulane before finally losing to an Adolph Rupp Kentucky team by just 9.

Jeff Lebo’s current contributions to Auburn basketball – or lack thereof: only one NIT bid in (likely) six seasons – could be read, as Forde does, as a sign of low expectations, “institutional indifference,” etc.

But, though it makes for easy, quick, bloggable copy, not Shug Jordan’s.

Not then. Not now.

Photo from the 1942 Glomerata.