*** The Nick Hits the Fan: Love the alliterative on-air descriptions of the Malzahn offense. Once at the beginning and then at 2:47.

“We expected to have to play through a real sh*t storm.”

*** Curtis Luper seems positive a “big time” recruit will commit to Auburn before Christmas. He also had some typically awesome things to say about the Iron Bowl. — [JDH – 9:20 a.m.]

*** Klosterman on Malzahn: If you haven’t read Ben’s latest column you should. Here’s what Chuck Klosterman thinks of Gus Malzahn, whom he of course considers one of the reasons hipsters should dig football.

Gus Malzahn, the unheralded offensive coordinator at the University of Tulsa who took Wyche’s hurry-up offense to its illogical extreme: The goal of Malzahn’s approach is to play at full speed at all times, lengthening the game and wearing out opponents mentally and physically. As a high school coach at tiny Shiloh Christian in Arkansas, he once won a play-off game by a score of 70 to 64. In that contest, his quarterback passed for 672 yards. Tulsa averaged 47.2 points per game in 2008.

*** I’d always heard she was an Auburn fan: It’s our Featured Video right now, but in case you haven’t noticed, go here and watch Kathryn Tucker Windham lead some journalism students who look like they’d rather be texting (yes, beautiful — talking to you. Let’s match the Auburn looks with the Auburn spirit) in the fight song. 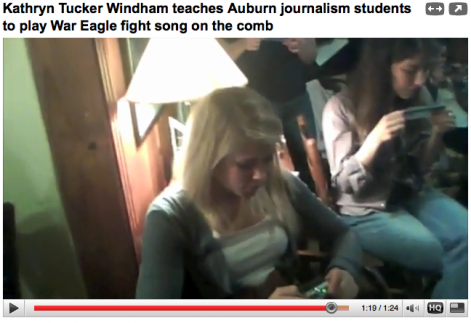 You can read about it here. Bella looks thrilled!