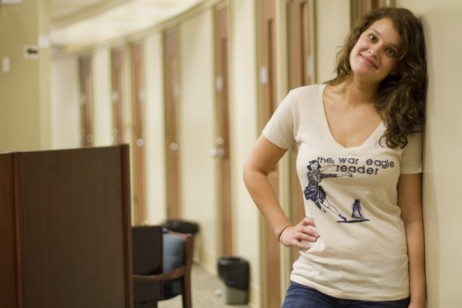 Why is this post leading off with world-Internet-famous “Snorg Tees Girl” Alice Fraasa? Because you, too, can own one of the fabulous non-Snorg Tees she’s modeling here. Proceeds go towards there being such a thing as The War Eagle Reader and your t-shirt will go towards making you the envy of all your friends. BUY. (Please.)

SEE? Anyone still wondering why the Outback Bowl took Auburn, here’s your answer:

Auburn has sold its original allotment of 11,000 tickets for the Outback Bowl, but that doesn’t mean the school’s ticket office is shut down.

Here’s where I add that Tennessee didn’t sell out their allotment last time they went to Tampa. (Or so I’ve read somewhere I can’t find at the moment.) The Outback folks knew what they were doing.

Elsewhere on the beat, Evan Woodbery looks over the Auburn QB situation in the wake of the Rollison suspension and leans towards Caudle … but more interestingly, he reminds that once upon a time (i.e. spring 2008) Auburn was making overtures to Jeremiah Masoli … the same Masoli who’s emerged over the past two years as the one of the best, most exciting players in the country. (Playing for Chip Kelly has a lot to do with that, of course.) There’s a hell of a what-if for ya.

Fully deserved. Daren Bates was named freshman All-SEC today, by virtue of playing the entire year at safety–no, really, I’m not sure he missed a snap–and finishing fourth on the team in tackles. This is the fourth year in a row Auburn’s placed a defensive back on the All-Freshman team after Jerraud Powers, Zac Etheridge, and Neiko Thorpe all pulled the trick their respective first years.

Big ups to Bates, and like everyone else I’m beyond excited to see what a guy with his motor and athleticism can do in the future.

Trooper Taylor: worth the hype. If you read yesterday’s Krootin’ post, you know that Antonio Goodwin first decommitted from Auburn early in the week only to do a sudden and completely awesome about face yesterday afternoon and swear he’d sign with Auburn come February. What changed?

Goodwin told Inside the Auburn Tigers on Monday that he had reopened his recruiting, though the Tigers still remained the favorite over Georgia, North Carolina, West Virginia and the rest of the major Southeastern schools that had offered him a scholarship.

Goodwin met Wednesday with wide receivers coach Trooper Taylor, whose four-month suspension from off-campus recruiting ended last week, and informed him of his decision, according to AuburnSports.com. (Emphasis mine–ed.)

It seems pretty simple to evaluate Taylor’s recruiting value at this point: wide receivers know they’re going to work with him, and as a result Auburn has signed four four-star wideouts (to one service or another), including the best player in Louisiana and a consensus four-star out of Georgia, in one class. Not bad.

Hmmmmmm. A brief krootin’ update for you as concerns the one and only Lache “of Heaven” Seastrunk. Or concerns his chances of landing at LSU, anyway, which seem to have dipped with the news that in the immediate wake of the departure of Seastrunk’s recruiter–Larry Porter, Memphis’s new head coach–the Bayou Bengals accepted commitments from not one but two different running backs. There are reasons for both (one is the highly-regarded Jakhari Gore, the other a three-star kid new LSU RBs coach Frank Wilson took a shine to at Tennessee) but still … that’s three RBs in LSU’s class already, and the timing makes you think, doesn’t it? (At least, it does if you’re an Auburn fan.)

Elsewhere on the krootin’ front, AuburnUndercover breaks down the various far-flung locations where Auburn’s coaches have been sent.

BlAUgosphere. Acid feels the same way about the Darvin Adams snub that I do, but more interesting is his defense of Lee Zimeba:

There isn’t an official offensive lineman stat page on the SEC website. But I’d take Auburn’s Lee Ziemba over most of the 2nd team offensive linemen, and a couple of the starters. Ziemba finished in the “honorable mention” category, surely a result of false starts. The sad fact is that Ziemba earned his reputation for jumping off in previous years. This year, he’s actually been penalized less than you think! On false starts, Lee had 1 against La Tech, 1 against WVa, 1 against Furman, 1 against Georgia, and one against Alabama. That’s a total of 5 false starts in a 12 game season, which is not many for a starting left tackle. Ziemba had no holding calls against him, all year. And the only other penalty was on his ineligible catch in the Georgia game.

Emphasis mine, because seriously? Damn. Knowledge has been dropped. Ben is also in an unforgiving mood regarding the Adams snub, and Phil Fulmer gets the brunt of it. (Yes. Fulmer.)

Etc. Tech’s defense, LOL … Sometimes there’s nothing other to say than “that’s really, really cool” … I’ve bagged on Chris Low a lot around here lately, so it’s only fair to point out that his overview of SEC assistants that could be on the move is pretty useful …