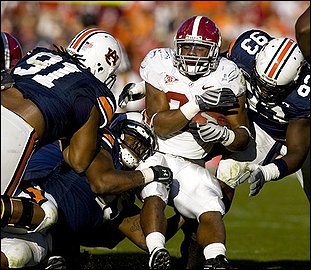 @captainannoying How do you feel about the UGA replacement search being bigger news than the DC search?

Hey @edsbs ABC just referenced the Wannestache. You should ask for royalties.

We have snow on all three screens. (None here.) Games at Pitt, ECU and Rutgers.

What the Yahoo Pick ‘Em game makes you do: Cheer out loud for Cincy as they tie the game.

Dramatic finishes in the first round of football action and the Bearcats come back to win!

Dear CBS? Any other Christians playing in this game today?

Reporter: Coach Kelly how’d your Bearcats pull it off? Kelly: It was the luck of the Irish, really, it was just a golden moment.

Tebow appearances in the CBS season retrospective: 11. @brianmcalister correctly picked the O/U, which was hastily set at 12. #watchparty

William Bell bought a mayoral ad just before the SEC Championship game, when all of his constituents are waiting for Bama. Shrewd.

Yall HAVE to see the finish to the Fresno State game. They just showed a highlight in the [email protected] game. Unbelievable.

I predict that the winner of this Alabama-Florida game will be a top-ranked squad from the SEC. #fb

Gary Danielson “Almost a good catch” is still a drop …

Wow, even the midfield logo looks better at the Georgia Dome than it did at Legion Field. Shame, really.

Gary Danielson: “Now let’s talk about Florida … ” Are they in this game or something? #GoGators #watchparty

@twstephens Peanuts were not one of the things you could see for sale outside Legion Field. ‘Que, tickets, drugs, weapons, your rims, yes.

And on the third drive Tebow will rise … #watchparty

Gary Danielson: “We do not have a camera obviously on it.” How in the world does CBS, for the SECCG NOT have a goal line camera? #watchparty

The blimp! That no one can see! Cause it’s a dome! #watchparty #SECCG #GoGators

Did Florida State’s defense rub off on the Gators last week? #watchparty

He might not walk on water, but Greg McElroy seems to walk on a wire. #watchparty

Maybe in the second half Florida will come out in the sunshine orange rather than @twstephens‘ white helmets of surrender (c).

@twestephens That was in one of those books the church kept out of the Bible. Tom Hanks uncovered it in his latest film.

This game is now officially underway. 12-9 Bama over Florida. #watchparty

Mostly I’m enjoying a good game, but if I have to choose I’ll take Florida. One of my committee members is a UF grad. (And for meanness.)

RT @twstephens RT @raphiellej: It’s almost as if CBS wants us to see if we can watch a game from start to finish on mute.

That girl, who just learned how to *HOLD* a football, beat the guy. Beware the premature echompulation.

I have always enjoyed the Dr. Pepper halftime challenge. We should see that in more games. #watchparty

@edsbs Albom is drafting “The touchdowns you throw in Atlanta” even now. We should squat on that URL.

Gary Danielson makes his contractually required “I was in the NFL” reference of each segment. Just snuck it in there, Gar. Phew.

Alabama’s day. They’ve got all the answers and look impressive. Of course Florida is making Greg McElroy look like a genius …

Hey @abc3340 No one is watching just now, but Academy Sports appreciates that newscast commercial all the same.

So, Danielson, now Florida is the serpent? Oop. Tebow intercepted and that’s pretty much that.

RT @CaptainAnnoying Tebow: I apologize, and to all Jaguars fans, you will never see anyone play harder than I will play for you next season.

That Inside College Football graphic is straight out of 1982. #flashbacks #watchparty

Congratulations Florida, you’re team is so uninteresting that CBS is now talking about pickles. (Can we have more Tebow, please?)

Man talk about your killjoy. “Heck of a game! His dad is awaiting sentencing.” What gives CBS?

When did Uncle Verne become the cop beat reporter?

Great game by Alabama. (And for a change Rammer Jammer is apropos.) #watchparty

RT @heathh: Yes Verne, the entire state of Alabama cheers for Alabama. Every single Alabamian. Sure.

Tebow is a passionate young man.

@Ren_: There’s a sign at the ACC game saying ‘We’ll miss you Bobby.’ @BrianMcAlister: Bobby hasn’t been to the ACC title game in some time.

RT @badbanana By using Willem Dafoe in their commercials, I assume Merrill Lynch is trying to creep me out.

Equally as compelling as Nebraska’s offense is the deliberately tight crowd shots from the ACC Championship game. #notmanyfans

(And Clemson is about to re-take the lead halfway through the fourth quarter.)

Sadly both the Big XII and the ACC championships are both more dramatic than the 1vs2 SEC game.

Brent Musberger is not at all sure how to feel about the possibility of a Nebraska win.

Florida versus Cincy in the Sugar. Alabama versus TCUnbelievable in the Fiesta.

All that Mack Brown lobbying finally paid off after all. \m/

Meanwhile, Clemson is down by five with the ball in the final moments …

Wisconsin is at Hawai’i. It is 29 degrees in Madison right now. Wisconsin is in their bowl game already.

In other news, it is point-three degrees colder here than in Madison, WI. Who let this happen?

@twstephens The Heisman Club learned their lesson with the Charles Woodson fallout. Quarterbacks and running backs only in that group now.