In which a recruit’s name is plugged into Google and the bits of information that trickled out–guru ratings, newspaper profiles, YouTube highlights, all that stuff–are synthesized in the hopes of getting a clearer picture of the player we’ll see at Auburn next fall. Previously: Jessel Curry. 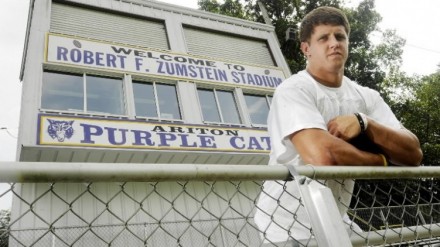 No point in beating around the bush here: Sanders is one of my favorite members of Auburn’s 2010 … er, 2009 recruiting class.

Why? For this headline will explain all:

Mmmmmmmmm, that’s good headline. First one like it for six years. But there’s more to Sanders than that; as sweet as it was for Auburn to swipe a commitment (and now a signee) off of the Tide’s hands, it’s even sweeter that Auburn’s swiped a commitment that promises some big things sooner rather than later.

Basics: Sanders played just about everything for the tiny 1A Ariton Purple Cats–no relation to Northwestern–out of Dale County, and for Alabama he’d have been one of their outside “Jack” linebackers in the Coachbot’s 3-4, but for Auburn’s purposes he’ll be a defensive end. Not tough to see why looking at his measurements: 6-4, 230-235, an alleged (very alleged, I’m guessing) 40 time of 4.6. Combine that kind of size with the versatility and athleticism to excel as many positions for Ariton as he did–despite injuries, in 2008 he racked up 1,057 rushing yards on 8.7 a carry, 208 receiving on just 13 catches, 90 tackles (71 solo), 32 TFLs, and 12 sacks–and it’s easy to imagine why he ended up as highly-sought after as he was.

Recruitnik hoo-ha: Sanders will wind up as one of Auburn’s highest-rated members of the 2009 … 2010 … well, either class, really. At Rivals Sanders is a four-star recruit with a grade of 5.8 as well as the No. 6 player in Alabama, the No. 12 weakside DE, and the nation’s No. 204 player overall. Sanders is also a four-star at Scout and No. 25 among all DEs, as well as their No. 2 player in Alabama in the preseason. Their evaluation:

One of the top jumbo athletes in the country, Sanders lines up at outside linebacker, down lineman, fullback, tailback, and quarterback among other places. With his size and frame, he’ll likely end up putting his hand down at defensive end, and once he begins to focus on one position and adding size and strength, his athleticism, talent, and intensity will take over. The type of player that can change the course of a game.

ESPN is a little less enthusiastic, ranking Sanders the No. 42 defensive end and giving him a high three-star grade of 79. They write:

He possesses a good natural build and presents the frame to add good additional bulk with time in a college weight program … He possesses good straight-line speed. Displays a solid get-off. He can be a physical kid when taking on blockers. Needs to work on using his hands better, when engaging and shedding from blockers because he can get tied up. Displays good lateral movement to side-step blocks. Takes good angles in pursuit. He is a solid tackler, but can attack high. Displays solid short-area, change-of-direction skills, but looks on film to have a high-cut build. As a pass-rusher, he can attack vertically, show flashes to try, use his weapons and work moves like the swim … Sanders is a pretty good athlete, who offers some versatility with a good combination of size and speed.

“Pretty good?” Sanders’s offer sheet positively begs to differ, because it’s just about as strong as offer sheets get: Alabama (duh), Florida, Florida St., Georgia (according to Scout), Clemson, Tennessee, Ole Miss, and for those of you (like me) particularly encouraged by classroom production, Stanford and Vanderbilt.

That’s right: this is a defensive player Nick Saban and Charlie Strong wanted. I think that says something.

Nine more minutes of junior year hyah and you can get your sophomore year fill hyah. That’s more than 25 minutes of Craig Sanders highlights in all! What a deal!

If you want the short version, though: Sanders can dunk:

As for observations on all this film … I’ll just say that it must be pretty fun sometimes to be 6-4, 230 and play 1A football. For (two) highlights against more substantial competition, check out the (brief) action from the AL/MS All-Star game.

As for things to read, the place to start has to be his B’ham News Super senior profile–Sanders was No. 6 on their preseason list, and if you’re wondering why his senior stats might end up down a little …

He projects as a defensive end, but could play outside linebacker in college. This fall, he’ll play all over the field at two new positions.

Free is moving him to middle linebacker to anchor the defense and from tight end to fullback to improve the Purple Cats’ ground game.

“I told him I wanted him to change positions, and he didn’t have a problem,” Free said. “He said, ‘I’m a team player. Do whatever it takes to make the team better.’

“He’s that good of an athlete that he could play a lot of positions.”

That piece makes it clear how rare and how important a once-in-a-generation athlete like Sanders is to a community like Ariton; so did the P-Marsh signing article we linked to yesterday. Both are recommended.

It’s actually sort of difficult to find much else of interest out there on Sanders–Google’s pretty well swamped with stories and posts about his decision to drop the Tide for Auburn. About that:

The University of Alabama football program lost their second commitment of the class of 2010 when Ariton defensive end Craig Sanders let Tide Coach Nick Saban aware of his intentions to decommit on Wednesday.

“We sent Coach Saban a certified letter Tuesday and from what we understand they got it today,” said Sanders mother Dianne Grice. “The whole thing is, Craig got rushed into this decision. I think he was trying to make his friends, coaches and family happy, but he wasn’t making Craig happy. This is a life decision and I think the more time that passed, he felt less comfortable about the commitment to Alabama.”

Sanders’s stepfather, David Grice, indicated that playing time was a likely factor in the decision to decommit.

“I think Craig was looking at Alabama’s depth chart and figured they were pretty loaded there. It isn’t anything against Alabama at all. They handled Craig and everything about his recruitment first-class, but Auburn stayed on him and stayed on him and that just got him thinking about other options.”

That last quote of course set off a torrent of “afraid to compete/we don’t want him”-style responses from the crimson corners of the Internet, to which I’d respond: I could care less if Sanders chose Auburn over Alabama because he has a severe case of digitocraniophobia*; he’s playing for us and not you and everything else is beside the point.

Fun fact: as a freshman, Sanders blocked four punts in a single game against Pleasant Home, an AHSAA record. (That link–Sanders’s profile on one of those recruitment sites–also has a nice list of his honors and awards and such.)

Here’s a question for you: Sanders played for a nondescript 1A school in the Wiregrass. A lot of standouts at those kinds of schools slip through the recruiting cracks, so how did Sanders wind up so coveted? By blowing through the camp circuit, that’s how, and here’s a star-studded combine report out of Texas from Sanders’s sophomore year to prove it:

Nice. But who was the camp’s overall MVP (over guys like Markeith Ambles, Storm Johnson, etc.)? Jessel Curry! Yeah, you’ll want to look at that.

There’s a few news reports out there involving Ariton and Sanders: 1 2 3, enjoy.

What conclusions we can draw, if any: Sanders is a hard worker, a versatile and imposing athlete with plenty of upside, a smart kid, and now he’s going to be in for the spring and get a head start on the rest of his class.

There’s a reason, in short, that he received the offers and attention he did. And those offers and attention suggest that Auburn has a serious future player on their hands. In 2011 Tracy Rocker’s going to be looking for two new starting defensive ends; Sanders should have as solid a shot at becoming one of those two players as anyone.

*The fear of numbers on one’s football helmet or other headgear, first diagnosed in connection with hockey goalie Richard “Red” Montreaux, who allowed 14 goals in a 1982 Canadiens-Red Wings meeting after an equipment manager painted his jersey number on the back of his helmet.