Those willing to try won’t be disappointed.

The NCAA championship-winning (5), children-fathering (4), Olympic Gold Medal-winning (3), world record-setting (who knows how many), Guillain-Barré syndrome-surviving, charity-starting, sports-commentating, product-endorsing, jet setting, “War Eagle’ing” face of American swimming and the 1981 SEC Athlete of the Year is an avid Facebooker and Twitterer and has embraced social media as extensions of both his personal and professional life.

““It’s a great way to stay connected to people, fans and friends… I’m doing as much Facebook communication as I am email now and I never thought that would happen,” Gaines says. “Because I do a lot of TV work for swimming I get so much more feedback… some not so good but I love it all.”

Some recent “not so good” feedback? The splash he made on his blog regarding the possible politics behind Chicago’s failed 2016 Olympic bid.

But Gaines knows of what he tweets; he’ll be calling his 6th Olympics for NBC in 2012.

He takes the criticism all in stroke.

“Are you kidding me?! It doesn’t bother me at all,” he says. “I have been doing this a long time, so to borrow a cliché, it comes with the territory… Chicago 2016 doesn’t need my advice. Pat Ryan and his organization did everything right. They just met the perfect storm and it was Rio.”

“Politics and the Olympic movement will be around forever,” says Gaines, one of the more than 280 Americans denied the chance to compete in the 1980 Olympics by Jimmy Carter’s boycott of the game, “so its not much of a concern because there is little we can do except to voice our opinions and if they make a little sense then hopefully the people in the right places pay attention.”

Gaines’ opinion on the state of Auburn swimming is nothing but positive.

“We have not won 14 NCAA Championships in swimming without a tremendous support system,” he says. “And now I am so excited that Brett Hawke is the new coach. He will follow Richard Quick and David Marsh with many more rings in the future.” 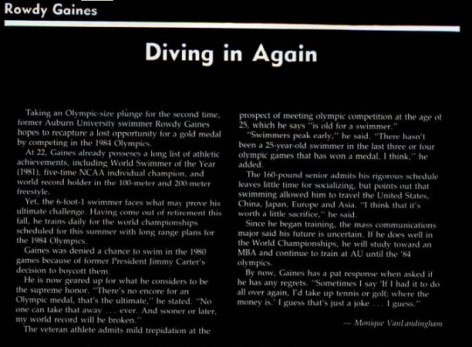 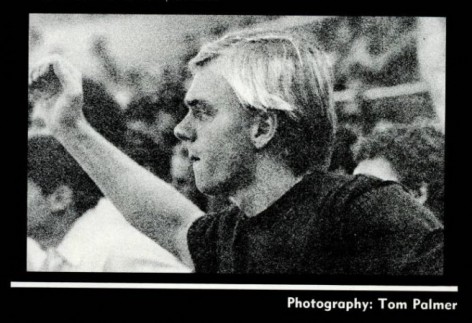 In 2003, a lifelong Auburn fan decided to get on TV by growing his hair out into a whitefro, sewing a horribly uncomfortable navy and tiger-striped jumpsuit, and attending the SEC Men’s Basketball Tournament. He succeeded in getting on TV, but was surprised that folks (mistaking his ‘fro for a pompadour) referred to him as “Auburn Elvis.” One haircut and a cheap wig later a journey toward minor sports celebrity had begun. Auburn Elvis now regularly attend Auburn sporting events and maintains a serviceable blog that documents his quirky approach to fandom. In his column, fAUllow Friday, he recommends notable Auburn alumni to track of through social media sites. Write to him at [email protected].