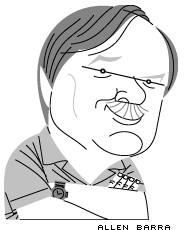 In a Wall Street Journal piece published just prior to the SEC Championship Game, columnist (WSJ, Village Voice, Salon, on and on), Bear Bryant biographer and friend of the family Allen Barra* included the Heisman hopes of Mark Ingram as a sign not of the Crimson Tide’s return to past glory, but a likely eclipse.

After all, Nick Saban has Alabama poised for a national championship in his third year as coach; it took Bryant four.

Bryant’s best player, Joe Namath, didn’t finish in the top 10 in Heisman voting; Ingram, according to Allen, is this year’s “odds-on favorite.”

… or at least he was (or might have been) until the ballots of southern voters, presumed to be Ingram’s best chance of winning the award, recently came to light.

In a lackluster year for the Heisman across the board, hints of lackluster support for Ingram across the south now have the Alabama fans who presumed regionalism to be his best chance of winning up in arms over a supposed southern conspiracy against Ingram, and the University of Alabama, in general. Like like it’s 1966 or something. Maybe they’ll write a book about it.

Birmingham News columnist Kevin Scarbinsky’s “wasted vote” for Alabama’s best player, Rolando McClain, has been ridiculed in Got 12? internet chatter and talk radio all week, with fans calling Paul Finebaum to complain, as Shane from Centerpoint did Thursday, about – I’m serious – the “East Coast bias” of Alabama sportswriters.

And then there’s… this guy, the proprietor of IngramforHeisman.com:

For folks who have turned their indifference toward the Heisman into T-shirts, Alabama fans seem supremely distressed by the thought of Mark Ingram not winning it.

Even Allen seems to hedge his bets, as all Alabama fans do when pressed on the subject, ending his story with a classic “we-don’t-need-no-stinkin’-Heisman” quote from sportswriter Dan Jenkins, who implies that the Tide’s having never won the award is by it’s own noble choice.

Alabama fans who do care about things as petty as the Heisman Trophy might take heart in remembering that a former candidate from the state of Alabama, who’s chances were actually hurt by actual East Coast bias, went on to win the award by what might, after tonight, be just the second closest margin in it’s history.

However, unlike Mark Ingram, Bo Jackson actually deserved it.

Just ask Allen, who in his definitive, almost passionate defense of Bo in the December 17, 1985 issue of The Village Voice (included in Big Play: Barra on Football, his fantastic 2004 collection of essays on gridiron controversies down through the years which lists my mom in the introduction as “living proof that Auburn has some nice fans”**) wrote “… by any objective yardstick, Bo Jackson is the best collegiate football player of 1985.”

Since the yardsticks objectively employed by Allen, a celebrated numbers man, are typically inclined to averages rather than totals, it’s understandable why he argues that Ingram’s 6.2 yards-per-rush in the SEC have him at least as deserving of the Heisman as Stanford’s Toby Gerhart and his 5 yards-per-rush in the PAC-10 (though there are better arguments that he isn’t).

But Allen can’t possibly think that Ingram, as he described Jackson 24 years ago, is “so obviously the outstanding player at the most important position in the game.”

If it’s averages we’re talking about, Ingram, who owes his Heisman consideration almost exclusively to Alabama’s record, isn’t even the outstanding player in that position on his own team.

* I couldn’t get hold of Allen in time to get permission just to post, in in it’s entirety, The Smearing of Bo Jackson, which is all I really wanted to do here (which might explain how disjointed it seems). Hopefully soon, though…

** Allen, I honestly didn’t know you were an Alabama fan until you told me about “The Last Coach” – you were always bringing me Auburn things. And rare books.