A candlelight vigil is going to be held tonight in remembrance of Sarah Anderson, a member of the Auburn University Marching Band. The piccolo player was killed in a traffic accident Tuesday night. The vigil is going to be held at 7 p.m. CST on the practice field, located west of the Poultry Science Building on Lem Morrison Drive. The Auburn Plainsman has the story of the one-car accident here. TWER offers our condolences. — [JMC – 3:35 p.m.]

*** Jay Ratliff is the Dallas Cowboys best player according to Wade Phillips.

“A lot of guys don’t know that they’re not playing like Ratliff,” Phillips said. “They think they’re playing hard.”

*** The Bard from Oxford, Terry Henley, #23 in your program, #1 in your hearts, is presently testifying in Birmingham on behalf of Mary Buckelew, yet another of Jefferson County’s disgraced former commissioners.

Henley: Buckelew returned his contributions to her campaign. “I don’t think that’s a person who would sell her office for anything.”

Thanks to K. Smith.

*** So this is what victory smells like? Wanna “transcend your spirit into a vibrant ambiance”? War Eagle?

“As the mighty War Eagle soars up above take a deep breath and take in the effervescent scent of Sicilian Lemon, Sliced Ginger and Bitter Lime that Auburn University for Men opens with. Allow the Chilled Black Pepper and Iced Juniper to cool your senses while Lavender, Purple Basil and Mediterranean Rosemary transcend your spirit into a vibrant ambiance. Sheer White Amber, Tonka Bean and Cashmere Woods add warmth at the base creating a scent that is as fearless and true as the Orange and Blue.”

I hate to do that. I really do. Butt, you know, I’m not really mocking the action, or that it was caught on TV… I don’t know, I’m just glad we have a coach who isn’t whatever enough to be on the radar at freakin’ TMZ.

Thanks to Dave in Gator Land.

*** Meant to add this to J.M.’s tribute yesterday. 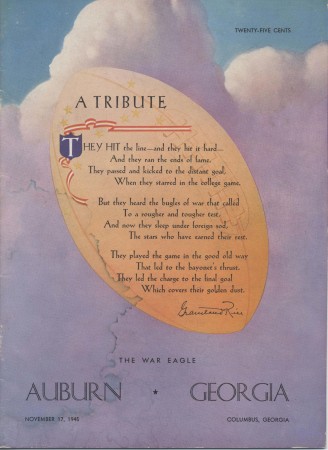 *** The Amen Corner timing, of course, couldn’t be worse, but it might be a slow few days here at TWER. With Jerry on… be strong… vacation… and TWER HQ in redecorating transition, content – at least of the WBE how-does-he-do-that variety – could be spotty.

But then again, it could not!

Please feel free to glut our vintage appeteasers (a house specialty!) while waiting on the the modern analysis main dish. It’s coming…