That’s pretty much the worst Sarah Thomas has heard – some guy up in the stands. What game was it? She can’t remember. Maybe last year’s game between Memphis and Marshall. Maybe the one at Liberty Bowl Memorial Stadium between Memphis and Jacksonville State, September 15, 2007, the night she made history – but not, she insists, a statement – as the first woman to ever officiate an NCAA Div. 1 football game.

Was it an insult? A compliment? Did he know she was a girl? 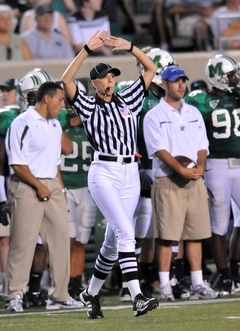 “They make me tuck my hair up,” she says, “and I don’t wear nearly any makeup out there.”

The 5”11, 36-year-old mother of two who helped lead the University of Mobile’s Lady Rams basketball team to the 1993 NAIA national tournament is able to fill out the stripes in ways that Penn Wagers simply cannot. Which is of course why the Conference USA, Mountain West and Western Athletic Conference line judge says she’d be lying if she said being a woman didn’t make her side job (she’s a pharmaceutical rep during the week), in certain respects, more challenging.

There are stares. There are extra interviews. ESPN can’t resist her.

But the opposite – that it makes it a bit easier – is also true.

“I’ve thought about this over the course of 13 years (Thomas started refereeing high school games in her hometown of Pascagoula, Miss., where she currently lives, in 1996) and I’ll hear stories from male officials about ‘well, so and so (coach) is going to chew her up and spit her out,’” she says. “But it really hasn’t happened. I’ve had one coach say ‘I guess I need to watch my language tonight’ but I said ‘Coach, this is a job, don’t be any different than you would.’”

A coach from one school – Thomas declined to say which, other than that it was Baptist – had a reputation for being particularly nasty to officials. She was warned to expect the worst.

“He was actually more than nice and almost helpful in making sure he was doing what he was supposed to be doing,” Thomas says. “He was great. He was probably the best coach in my career. I just think it’s in a man’s nature, when a woman is present, to be a little more sensitive.”

Around Thomas, they needn’t be.

“Sarah was always a fierce competitor,” says Martha Algernon, Thomas’ former basketball coach at UM. “She would compete at anything she was doing and she wanted to win. I know she kind of broke the barrier, so to speak, but I don’t think she was trying to break into the fraternity. I think it was just a passion she had for some time. Her passion has gotten her to this level and this exposure.”

As has her faith, says Thomas, whose entire officiating crew prays before each game.

“Everything happens for a reason and God’s hand is in it,” she says. “For whatever reason He has blessed me to have good judgment and has just given me the talent to officiate.”

Gender, she says, simply doesn’t enter into it.

What about girls actually playing football?

She chuckles to herself.

“You are the first person who has ever asked me that.” (Eat your heart out, New York Times!)

“I know my view really doesn’t matter one way or the other,” she says. “But God has created us the way He has created us and men are just made different than women. But there is not a full contact sport offered for women that I’m aware of, at the collegiate level, and if a coach believes that a girl is capable both physically and academically, to participate [in football], then I don’t think he can tell her ‘no’ because of her gender.”

It was unlikely that the woman who might be there to call that girl out of bounds would say anything less.