I’d like to start this with one tweet from Thursday. With the family, casual sidewalk Bama fans all, you can expect the normal amounts of good-natured grief. But then there’s this:

If you don’t understand the Iron Bowl’s importance: My 90-year-old great-grandmother is giving me grief.

(I don’t know how much football she’s watched in her life. I can’t imagine it is much. I’ve watched one football game with her, ever. On Thanksgiving day, however, the sweetest woman in the world actually scoffed at me, turned her head and stopped talking because I “go for Auburn.” It was cute. So take that every other rivalry. When your great-grandmother gets bent out of shape about the Purdue/IU or Oregon/State or Pitt/WVU game you might have some room to talk.)

On our way to see the Tigers play!

They’re heading to Jordan-Hare too

Just passed an SUV and the driver had his Iron Bowl ticket stuck in his window.

Traffic is backed up five miles before Wire Road.

They’re ready for the game

Reason for the traffic delay: After 20 years Tide fans still can’t find their way into Auburn. (We’re fine with that, really.)

Found a pack of police motorcycles just after the rest area. They’re secretly pretending to be in a gang.

They are almost there!

Most dangerous decision on the road today: Being in a car decked out in Bama stuff trying to cut off a car in Auburn.

He can’t merge, cause

There’s a Tiger in your van!

Santa Claus – the Bama version – is next to us. He’s sporting a handlebar mustache. (Evil Claus?) No one is letting him merge.

(This went on for about seven minutes at the College Street exit on I-85. There was a bit of jawing between him and trucks in front of us. You’d like to think it was good-natured, but we’ve no way of knowing. Whatever it was, he was having no luck getting onto the exit ramp.)

Best way to rile the crowd and honor the 1989s: Introduce a few at a time throughout the game, showing the key plays of that win

(They almost did this. We could hear the video being played as we walked to the stadium and of course got to see the team — and some of those guys look ready to play — but my idea was to start with the lesser well-known players from the era and then lead up to the legends in a fourth quarter break. Imagine Pat Dye walked onto the field late in the fourth with Reggie Slack by Trooper Taylor and a handful of towels … )

See the background guy? He has ’em.

(The irony of scalpers in need while he has tickets in hand always amuses. I understand his point and purpose, but it still gives me the giggles.)

Back to my earlier point: The Alabama band goes the wrong down College Street.

(We missed Tiger Walk because of the heavier-than-normal traffic. The wife suspected it might have been a larger collection of people making a day-trip of it as we always do. We’re accustomed to the flow and timing everything just right, but had problems today. I blame the Bama fans.)

I’m guessing we’ll have no flyover? Two blimps and an advertising plane are over Jordan-Hare.

The line at Momma G’s Too

RT @Ren_ Auburn Prof: “No matter what happens, we win, because we get to stay in Auburn and they have to go back to Tuscaloosa.”

Notre Dame officials are meeting with Saban before kickoff. Mt. Kody missed the bus to the game. #rumors

Bama fans are not Tidy Tigers, and they are littering all over the place.

I just saw a woman in a regrettable 8-bit houndstooth dress. #abominationtonature

Bama fans making a sign: “My wife bought Iron Bowl tickets for our 20th anniversary.” Of course SHE was making the sign.

(I always ask, because it amuses people to hear it, for the secret to their success. You get good answers. Thoughtful, funny, exasperated and truthful ones. This guy, without missing a beat, said “The Lord.” I said “And a wife willing to put up with your football …” She turned and nodded her head. Very cute couple, despite their taste in schools.)

RT @wennybrown: A Bama fan on 459 with shoe polish writing on the car. The writing looked Arabic. Bin Laden is a Bammer.

Even the ushers are hyped for the game.

Dear Jay Jacobs, Upon reflection you sold too many tickets to Bama. War Eagle, Everyone That Matters

The 1989 SEC Champs, victors of the first Iron Bowl at Auburn, are being introduced; they played clips from that game.

Seriously, what self-respecting Auburn fans resold their tickets to Alabama people? There should be an investigation.

Honestly, one of the points of leaving Birmingham was so we wouldn’t have to be surrounded by Bammers at home games.

Auburn won the toss. Time to go to work!

Chiziks pregame speech: “Its not about you today. Its about people you know, and a bunch of people you dont know. Remove all self today.”

Bama goes three and out. Auburn takes over at the 20. 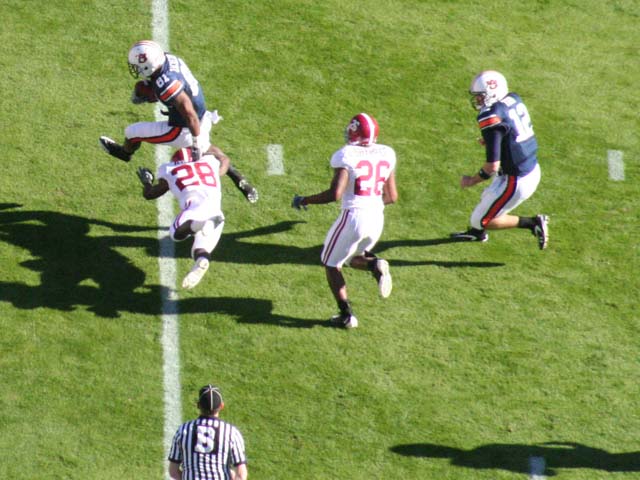 TOUCHDOWN AUBURN Terrell Zachery, 68 yards on the end around. Toilet paper is falling from the sky! 7-0 AUBURN.

(I didn’t notice in the game, but later editing pictures you can’t help but see number 12 running 65-yards down field. It came too late for what the kid deserves, but you can’t question Chris Todd’s heart. He may not end up on the side of the stadium, as was said on TWER recently, but he’s quietly added two big records this year and has been nothing but steady and a steadying factor in what could have been a tumultuous time. Chris, War Eagle to you and your family. (They’ve seemed like a very nice group on Everyday, and that’s been the most humanizing component of that show for many people who’ve watched the program.) Keep your head about you in life, Chris, and you’ll deserve the success you go on to earn.)

The Bama fans sat down … Hmmmm.

Onside kick, check. (Best back in the s)Tate gains nine to midfield.

Wow our SLOW QB is getting first downs …

Best false start ever! Bama fans, classy as ever.

(As this is a family site I won’t repeat, verbatim, what was being said. Suffice it to say they were not appreciative of the law of averages finally working in Lee Ziemba’s false starting favor. And, apparently, a Bama player should not be penalized for, you know, breaking printed rules by throwing the ball in disgust which displays both unsportsmanlike conduct and could conceivable delay the game. Bama fans.)

We should really scheme a new kickoff plan.

(I, as the guy that said a week or two ago that Javier Arenas is the most dangerous player Auburn must defend, see what they are TRYING to do. I also see that they can not do it.)

Honk if you sacked Greg!

(Note the hold on the right side of the shot.)

Auburn has a two score lead, the momentum, the ball and the joy of being, you know, Auburn.

A drunken Alabama girl is trying to be polite, in a drunken way, to Auburn fans. Awkward.

@supurmario27 is the man. Auburn punts, keeping the ball from Javier. Tide starts at their 35.

Umpire for defensive player of the game!

Auburn football hero, Walt McFadden, gets flagged. He is so awesome that he makes a 15 yarder just 5. Still, I’d rather he didn’t

Auburn punts from their endzone. Bama takes over at the AU 45. Defense is imperative.

Other things that are abominations to nature: Row Tahd cheers inside Jordan-Hare.

@supurmario27 takes the reverse for 13 yards. Down the field and Alabama plays dirty cheaters on the corners. Bama fan=disbelief

Todd gets sacked, fumbles the ball away at midfield. #$%&!

Auburn defense holds, Tiffin’s dad knows he could kick that. Auburn starts at their 25.

I’m confused Bama fans, was that The Miss? I might buy that one from Daniel Moore.

Auburn is in Bama territory quickly. @supurmario27 came off favoring his shoulder.

The Plug Nickle Band is on the field. They spread an 8-bit blanket of houndstooth. It looks like a burial shroud. #ohwait

The Plug Nickle Band brings a bass guitar, a guitar and a microphoned clarinet (played by a professor).

Don’t get me wrong: The microphoned professor of clarinet is a talented musician. He’s taking a student’s spot, but whatever.

The Plug Nickle Band plays Percy Sledge’s When a Man Loves a Woman. Make your own jokes, Twitterverse!

AU band plays the bullfighter, J-Lo for reasons that baffle philosophers, and Mask of Zorro. #needEarthWindFire

No speech from Chizik on @AUHD before the team came back on the field. Shame, that.

And I quote Auburn’s 1894 QB, Walker Tichenor: The duty of this eleven was | To put Tuscaloosa in tears.

(Third-and-1? Pass? Really? Remember what Chizik said about being a running team?)

Trading punts at the Iron Bowl. Auburn takes over at the 24.

Trading punts at the Iron Bowl. Auburn takes over at the 24.

(At the risk of being a little too melodramatic with this, you can’t help but notice that he threw that ball from the shadows and into the light. I’m just sayin’.)

For a beautiful moment of bliss I take back every suspicion I’ve had about this defense.

Bama kicks a field goal, but the Auburn defense, back against the wall, holds AGAIN. 21-17.

Someone give Trooper a raise so he can pay for the upcoming rotator cuff surgery.

Todd throws an ugly pick on a busted play. Bama takes over at the AU 43. Come on once more defense!

Love this defense. Love them.

Fourth quarter. 21-20. This unholy mess is still in doubt, let’s send these folks back to Tuscaloosa in shame.

OH MY Todd! Willing it!

(Have you ever seen anyone of Todd’s assests and liabilities making something more improbable than moving the chains on a desperate third-and-long scramble? He may not make it on the outside of the stadium, but he deserves a mural somewhere inside the place. If he had another year on the plain he’d come to personify everything you love about the place, and you are beginning to realize it.)

A bitter wind is blowing in. Saban must be ticked.

I want Durst’s sand wedge! Bama has to start at the four, with the student body in their earholes.

Somebody get the Pepto, Saban looks sick.

Auburn takes over with a one-point lead at the Bama 45.

(This guy likes Zubaz more than the Tide.)

Come on Defense, you deserve this.

(Defensive holding! CONSPIRACY! Or something.)

Never been more proud of an Auburn team, or especially an Auburn defense. Never. 21-26.

59 glorious minutes of joy and one more minute of hope. Take it every time. Thanks, Tigers. Auburn men, all.

(In the final analysis, basically the same team that was blown out last year controlled this game and was throwing to win against one of the best teams in the nation. There are no moral victories. Underclassmen, remember this. The spirit is there; Auburn is rising.)

I’m torn: Just had to give directions to Bama fans. Should I give them good directions or get them more lost?

The Bama fans that were lost? Of course I gave them good directions. Even differentiated between turning left and right, just in case.