A brief, semi-regular look around your online home for all things Auburn.

In case you missed it … 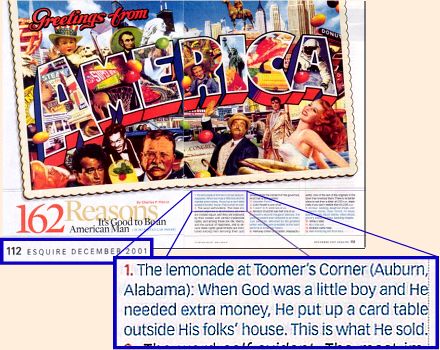 I think that’s just about the best possible way to describe it, don’t you? In other recent “Photo of the Day” action, this seems like a good way to end up missing the game entirely.

YES. Do you know what’s awesome about having an Auburn philosophy professor write about football for your web site? This is what’s awesome:

I want to make something clear.

Auburn was good for five games.

True, the opponents were not all top-tier teams, but Auburn played really well. Even if the season spirals, Auburn fans should keep those five games in mind. Those games give a taste, all too fleeting, I admit, of what this staff can do when it has the players, the depth, it needs to compete. The last half of this season may be difficult. But Auburn fans need not to ask, What have you done for me lately? But rather, What have you shown me is possible?

I’ve found the lack of patience shown the past two weeks by a lot of Auburn fans–even including some of us here at TWER–kind of stunning, and Dr. Jolley’s encapsulation here explains why: yeah, the present hurts, but we knew it was going to hurt. What this season is really about is Auburn’s future, and between the glimpse we got of this team at the height of its powers and the excellent work being done in recruiting, the future’s every bit as bright as we could have hoped it would be under Gene Chizik.

Besuboru! TWER’s C.J. Crutchfield was there for Friday night’s Celebrity Home Run Derby at Plainsman Park and provides a full report. Gabe Gross came away the winner–well, the Boys and Girls Clubs of the Greater Lee County were probably the biggest winners–but as for the the highlight of the evening …

Fans who have been waiting since 1986 for a player with half his ability stood and clapped for Jackson as he stepped to the plate for a pair of lethal line drives but not a single homer. The crowd roared as he walked away.

Rod Bramlett, the voice of the Auburn Tigers, met him coming off the field.

“How special was it to be back in front of an Auburn crowd?”

Bo looked up in the stands.

“The way I see it is, I’m not special. You people make us feel special. It’s because of you all that we are here. We come back here because this is home to us.”

C.J. writes that Friday was better than Saturday night. I don’t doubt it. (Hey, look, we’ve also got video.)

Heck, before the Tennessee game, Kirk Herbstreit is on the screen telling me Auburn is going to be 7-0 going into Baton Rouge. I nod my head. Yeah they are, Kirk. Smartest thing you’ve ever said. Surely Arkansas and Kentucky cannot stop Auburn. Gustav is a Jedi and Tate ‘n’ Todd are his light sabers.

Then Arkansas happened. And Kentucky followed. And now far-fetched and hopeful words like “New Year’s Day Bowl” and “eight wins” and “SEC Championship Game” have been replaced with “Shreveport” and “Furman” and “Fire Ted Roof.”

We (the royal we) thought Auburn was a great offensive team with an undermanned, under-performing defense and shaky special teams. We could live with that. We missed watching competent offensive football.

Of course, the next four sentences Ben writes are:

Or at least wrong for two weeks.

Who’s to say what next week will bring? Maybe Auburn will beat LSU by 30 and all will be forgiven. Patience.

The column concludes with commenter CD’s comparison between Chizik’s first year here and a certain coachbot’s in Tuscaloosa. This is the bizarre life of the Auburn fan this week: caught between the stinging pain and heartbreak of last Saturday and the knowledge that things can turn around for the positive just as quickly as they did for the negative, between understanding that things will get better eventually and the worry about how long it’s actually going to be. At least we’re all in it together, right?