We know Auburn’s had problems all season containing quarterbacks on the run, especially scrambles on third down. When even the clod-footed likes of Ross Jenkins and Ryan Mallett can break loose for crushing third-and-long conversions against you, you’ve got a problem.

And though Jordan Jefferson was always going to be a handful, you can see part of the reason why Auburn’s struggling in QB contain in the series of game stills below. This is Jefferson’s late-first quarter touchdown following the Todd fumble, and here’s Auburn’s pre-snap alignment: 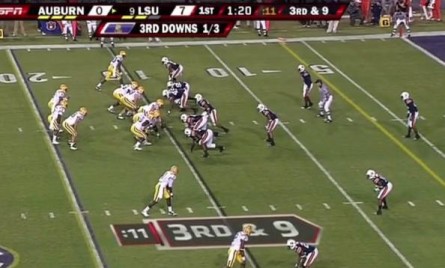 This is a cover-2 dime: Stevens–lined up between the tackles and showing blitz–is the only linebacker on the field. Etheridge and Bates are playing deep with four different corners all locked up in man coverage. (That’s McFadden three yards off the LOS looking linebackerish; he’s got one of the backs. The corner all the way at the bottom of the screen is either T’Sharvan Bell or D’Antoine Hood–I think it’s Hood, but he never re-enters the screen and all I know is that his jersey number is 20-something. At times we’ve seen nickel and dime packages bring Mike Slade onto the field and Etheridge slide to corner; that Auburn doesn’t make that move here makes me think either Hood’s ankle is almost back to normal or Bell’s done good work in practice.) 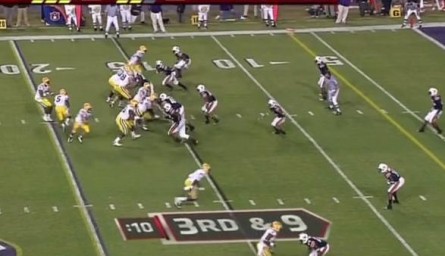 The ball is snapped. No surprises behind the defensive line–Stevens isn’t blitzing, McFadden is indeed manning up on a back, Bates and Etheridge are backing off. The weird thing are the DEs–neither has even crossed the LOS yet and Ford is still two yards behind it. 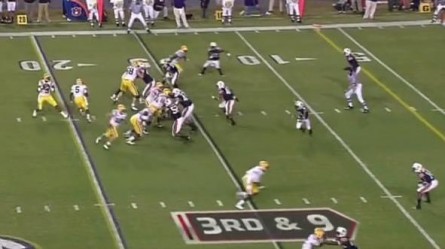 Turns out (not surprisingly) it’s a stunt–Ford is now angling towards what appears to be a hole in the middle of the LSU line. But Jefferson has already taken a couple steps and is scanning the field, while Ford still hasn’t even crossed the LOS … and for that hole to remain open, Carter’s going to have to drag an LSU double-team outside with him. 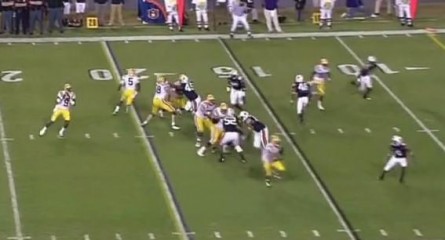 A few beats later, it’s clear: this isn’t working. Coverage looks good, but the double-team is shoving Carter back into the middle of the field and Ford’s still not even close to creasing the line. Coleman and Goggans have stunted on the other side of the line as well, with Coleman trying to seal the blockers inside while Goggans goes around him, but it’s still going to take forever for Goggans to reach Jefferson … and that’s assuming he can get there untouched from this point. This is just taking too long. 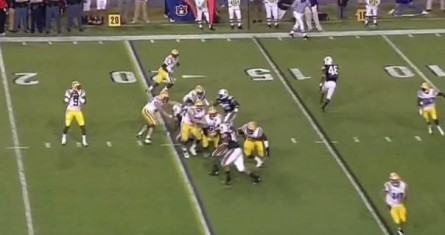 Now Auburn’s really in trouble: Carter’s been pancaked and Ford’s in too deep to be able to flash back outside. Not only does Jefferson have time enough to phone in his postgame pizza delivery order back there, but with Stevens in man coverage the left side of the field is completely, totally wide open. 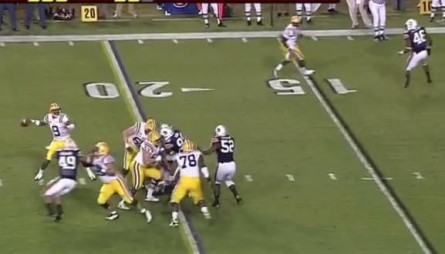 Coverage has been excellent (7 players dropped in the red zone, it should be) and Auburn’s catching a break as Jefferson hasn’t noticed how much room he has to run and might get his pass batted down by Coleman. Will Auburn get away with this?

Nope. Jefferson has pump-faked Coleman into the air and takes off into the acres of space vacated by the collapsed Ford/Carter stunt. Auburn’s only hope is Etheridge, the safety on that side–Stevens is still playing man and isn’t even looking at the QB, as well he shouldn’t–but he’s still not even in the picture and Jefferson is very good in space. 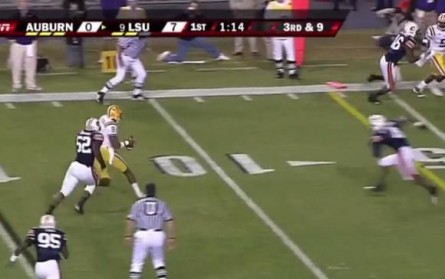 To his credit, Coleman has pursued well after landing back on his feet. If Etheridge can get outside of Jefferson and force him back inside, either he or Coleman can make the tackle … 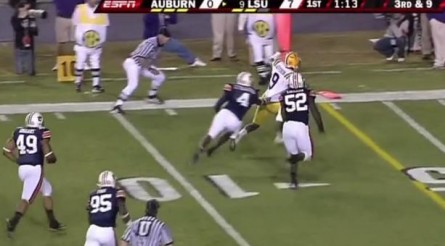 In some ways this is poor execution from the Auburn players. Ford seemed slow off the line to start the play; Carter’s got a tough assignment in standing up to a double-team, but he had to get at least a little outside to prevent the exact running lane Jefferson took, instead getting pancaked in the middle of the field; Etheridge has to know that with no QB spy and everyone around him in man, he’s the only line of defense if Jefferson breaks contain, and he seemed slow to react while–I think–taking less-than-optimal tackling angle.

But for all of that, I have to say I think this one is on the coaches. Given Jefferson’s mobility and Auburn’s week-in-week-out difficulty stopping QB scrambles, that threat should have received more attention–i.e. a spy, a short zone, or at least traditional pass-rush lanes–than this play call showed, shouldn’t it? On top of that, why run this stunt with this personnel? The point of lining up Goggans and Carter at tackle is to put four pass-rushers on the field, but this stunt appears to be designed to make Ford and Goggans the “real” rushers while Carter and Coleman tie up blockers. Call me crazy, but I really don’t see that asking Antoine Carter to stand up to a double-team in the middle of the LSU line is the best use of his talents; if it’s four rushers you want, let them rush, right? And lastly, I also have to question the use of Ford here–he’s a true freshman with one SEC-caliber skill right now, and that’s as a straight edge-rusher. Why complicate that, especially when the coverage call means any breakdown in QB contain is automatically going to lead to big yardage?

I think the world of Tracy Rocker and still have plenty of faith Ted Roof will prove a good hire for Auburn when all is said and done. But I don’t think their coaching decisions on this particular play were the correct ones, and between the difficulty Auburn’s having in executing play-calls like this and the lack of focus in the scheme on containing the quarterback, it’s not hard to see why this has been such an ongoing problem for Auburn.

Confession time: I didn’t chart this game. I spent parts of the first three days of this week traveling and have had to play catch-up ever since: charting takes a lot of time I didn’t have. Sorry.

But here’s a few impressions from my second watch of the game anyway:

You’ll think I’m crazy, but Todd actually improved on his Kentucky performance. Not by a lot. But some. Against Kentucky he routinely missed glaringly open receivers and shouldered responsibility for the end of several drives; against LSU, Todd routinely hit his open receivers when he had time and was generally not responsible for his drives stalling.* The bigger problem seemed to be that he had almost no open receivers and rarely had time. (Drops didn’t help, either.)

I’m not saying, by any stretch of the imagination, that Todd played well. He threw a pick. He fumbled. He never converted a third down longer than 3-4 yards. On one or two of the sacks he seemed to have time to throw. I find it hard to believe that no one was open downfield on the many occasions Todd dropped back, had time, and either scrambled or threw the ball away. (Such is the limitation of television: are plays like this the fault of receivers not coming open or Todd being afraid to throw the ball? There’s no way to know.) And so, yes, I’d still like to see Caudle Saturday, because when you’ve posted a sub-3.5-yards-per-pass-attempt mark for two straight weeks, it’s time to let someone else have a try.

But it wasn’t a reprise of Todd’s rock-bottom performance we saw against Kentucky. That much we can say for him.

Oy vey, the secondary was bad. Jefferson had the best game throwing the ball I’ve seen him have, LaFell and Tolliver are both NFL-caliber, we’re still playing off of the LOS for reasons I don’t fully understand, I know McFadden is banged-up and Bates is a freshman … but for all of that, still, yikes. Thorpe in particular really seems to be struggling–he’s just not reacting to the ball as quickly as I would guess he needs to.

It’s the same story for Bates in run support. Check out where he is just after the handoff on Shepard’s long TD run:

A moment later Shepard’s through the line and no one has a prayer of catching him. Bates is going to be a stud down the line, but for now, it’s life with a freshman, folks.

That said, and you’re going to think I’m crazy again, the defense still isn’t as far away as you might think. Trivia qustion: how many of LSU’s scoring drives actually started in LSU territory?

The answer is two–and one of them was aided by 35 yards’ worth of penalties (15 of those from the questionable Etheridge flag) and the other was the Shepard run. (The other three covered 16 yards after the Todd fumble, 21 yards after the muffed punt, and 45 yards after the ridiculous pooch kickoff.) True, Auburn got more than a little lucky on Jefferson’s fumble into the end zone, but if they can cut out the penalties and if they can quit giving up freaking 60-yard touchdowns and if the offense and special teams will quit putting them in terrible situations, they’ve shown they can do just enough to get the stops the team needs. Having The Toro’s head straight made a huge difference in Auburn’s run defense–take away the Shepard bust and Auburn held LSU to 1.7 yards per rush. That’s not bad at all.

Of course, those are all ifs Auburn’s been working on since the first week of the season and they still haven’t been resolved, so getting them fixed at this stage is probably not happening. But if they are (and Toro’s and Coleman’s resurgences continue), I’m telling you, this D won’t be that bad.