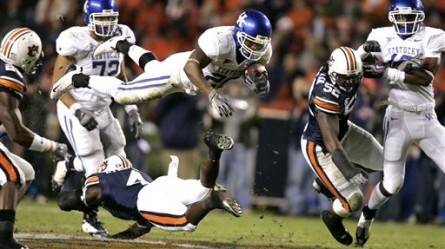 — We’re back on ESPNU tonight, and back to Messrs. Eric Collins and Brock Huard for our broadcasting needs. It’s clear from their pregame discussions that they sorta expect things to go the way everybody else expects them to go: Auburn “has a fantastic offense, one of the best in the entire country” and they think Chizik’s midweek “1s on 1s” practices should pay dividends; meanwhile, Kentucky’s QB situation is a “huge question mark.”

I’m sure this rough overview of the two team’s strengths and weaknesses is entirely accurate and will in no way be horribly, depressingly ironic by game’s end. Let’s play some football!

— As Todd takes the first snap from scrimmage, Collins says this “must be a big game for him” because, you know, he’s from Kentucky. Remains to be seen if wanting to defeat the state school from the state Todd originally hails from that Todd turned down in the recruitment process will give him the motivation necessary to fix the accuracy problems from last week–because motivation and passing accuracy are closely connected–but hey, it can’t hurt. I think.

— Well, this is encouraging: Tate for 5, McCalebb for 4, Tate for 4, Zachery on a reverse for 15, and Auburn’s already gained more first downs on this drive than they did their first, what, six in Fayetteville? Hooray for progress!

— Wait: hoorays retracted. On first down we get a close-up of Ziemba before the play starts (he just wiped out a UK defender on the reverse) and he appears to be lining up as a wideout. We know something funny’s happening, and it’s Malzahn trying out one of his wacko formations. Result: a throw to Zachery that’s buried for a yard loss. That’s followed by a check-down to Fannin, a third-down incompletion to Adams, and a horrid 24-yard punt from Durst that successfully avoids the touchback he was so desperately trying to avoid but gets fair caught at the freaking 20 yard line, so it doesn’t even matter.

Ever shot a bottle rocket into a lake? You know that sad little bloorp sound it makes when it goes off underwater? That’s the sound the end of this drive just made.

— So what sound does Auburn’s defense make at the start of Kentucky’s drive? I don’t know: maybe the sound of a beanbag chair being sat on by someone morbidly obese, or air escaping a whoopee cushion or something. Visually, what it looks like is the middle of Auburn’s defensive line being caved again and again and again: the Wildcats rush for 8, then 2, then 27, then 9, then 7, moving from their 20 to Auburn’s 27 without so much as even needing a third down.

But it’s understandable, because who would have ever thought Kentucky would have come out trying to run the ball!?!!? *punches wall*

— Here’s a happy ending, though: on 2nd-and-11, QB Morgan Newton appears to fake the wrong way on a play-action, and to avoid Antoine Carter sacking the hell out of him the UK tight end shoves him square in the back directly in front of the referee. No flag. And normally this would be bad thing.

But karma, as we know, can be such a bitch. And after Kentucky’s stopped on third down by an excellent play by Antoinio Coleman (who sheds a block and tackles Cobb in space, the kind of play he hasn’t made for three weeks), they line up for a field goal, and Jake Ricks knifes through and blocks it, and the ball rolls directly to Neiko Thorpe who gets one excellent not-from-behind block from McFadden and there he goes! TOUCHDOWN, Auburn! 7-0, and about that non-call on the penalty:

— Auburn’s coaches apparently thought about as highly of their team’s chances of containing Derrick Locke as I did, because for the first time all year the Tigers finally concede to a pop-up, which lands on the 28. And which is still returned for 17 yards to the 40-freaking-five! We’re a week away from my asking if Auburn ought to go all onsides all the time, and I swear I’m not even exaggerating. Much.

— Kentucky fumbles on first down for a six-yard loss and goes nowhere again; Auburn gets two solid runs to set up a makeable 3rd-and-3 on their own 22; they try a screen to Smith which is comprehensively snuffed out by the defensive end. I think it’s way, way too soon to say opposing defensive coordinators have “figured out” Malzahn’s offense, but you’d have to go back to early in the Tennessee game to find an Auburn screen that fooled anyone. Something here needs to be repaired.

— Non-field goal-block special teams thus far this game: AAAARRRGGGGHH. Durst punts for all of 34 yards and sets Kentucky up on their own 44. The Wildcats haven’t made a first down in three drives, but because Auburn’s kickoff coverage was so awful and Tydlacka’s been outpunting Durst, they’re the ones with the field position advantage. Bleccch.

Between the first and second quarters seems like as good a time as any to point out that Rich Brooks’ choice of apparel for this game: a huge Kentucky parka, thick-looking gloves, and a blue balaclava. Meanwhile, the Chiznick’s toughing out the chilly temperatures in what appears to be a standard-issue Auburn windbreaker and no head coverage.

This gives me hope that Gregg Easterbrook’s sturdy “Cold Coach = Victory” axiom will come into play and help Auburn to victory. But of course, Easterbrook is an NFL columnist, and has proven himself such an overwrought holier-than-thou blowhard when writing about college football that I gave up reading TMQ years ago. Whatever Easterbrook would assume about a college football game would by definition be the opposite of correct, so does that mean that in the college game it’s the warmer-dressed coach that has the advantage? This game will be an interesting experiment.

— Kentucky drives for a 3rd-and-6 on the Auburn 30, but Josh Bynes recognizes that the running back he’s been assigned to cover man-to-man is blocking and rushes forward to sack Newton, forcing a punt. I don’t know who those imposters were impersonating Auburn’s defense on that first series of Kentucky plays–or, OK, don’t know who these imposters are who have shut Kentucky down ever since the real Auburn defense started the game–but I like the players we have now much better.

— Speaking of never minding that first drive, Auburn’s been regressing back to their Arkansas-level of performance ever since. This drive begins with a buck sweep into the loaded side of Kentucky’s defense (could Todd not check into a run the other way?) for 2, then a Wildcat run by Burns that features a huge push by the offensive line but only goes for 5 when he dances into a tackle rather than burrowing for a possible first. But hey, 3rd-and-3, we should make this, right? Nope: Todd throws just a hair behind Adams on an out and Adams isn’t strong enough with his hands, allowing the Kentucky corner to recover and knock the ball away. That’s one Auburn first down in three possessions, with back-to-back ‘Cat possessions tossed in as a result of the FG return. I wonder how Auburn’s thin defense will respond late in the half, especially with Kentucky starting just behind midfield after another 34-yard net from the punt team?

Admittedly, the big plays here don’t have much to do with fatigue: on the drive’s first play Bynes launches himself like a torpedo into Newton’s jaw, turning an incompletion and 2nd-and-10 into 15 yards and a first down. And on a critical 3rd-and-7 from the Auburn 12, Roof tries a stunt on the right side of Auburn’s defensive line that opens up a massive hole for Kentucky’s quarterback draw. Six yards, 4th-and-1 gets converted, touchdown one play later. Roof has come in for way too much abuse from Auburn fans for his unit’s struggles, but given how likely Kentucky was to run the QB there, I think that one’s on him.

— Auburn takes over, runs twice to set up 3rd-and-4, and then despite being given a ton of time Todd can’t find anybody open and throws incomplete. Gee, where have I seen a sequence exactly like that before? Oh, right, Auburn’s previous two drives. Time to try something different, Gus.

–Auburn stops Kentucky to force the proverbial exchange of punts (thanks for throwing on first and second down, ‘Cats), and Auburn actually comes out ahead this time: Durst’s was a 54-yard boomer and Tydlacka’s a 25-yard shank. Add in a return for -4 yards by Cobb, and Auburn just picked up 23 yards. Given that Auburn’s barely managed one first down on their recent possessions, much less two, yeah, getting two freebies seems like a pretty big damn deal.

— To his credit,  Gus does try something different this drive: 2nd-and-10 becomes a swing pass to Fannin for 7, and we see the wrap-around draw for the first time tonight on 3rd-and-3. 8 yards, and Auburn’s in business at Kentucky’s 33. Five plays later it’s 3rd-and-4 on the 10, and Dr. Gustav tries something really different: a straight quarterback draw with Todd! Kentucky’s caught as off-guard as it’s possible to get caught, and even a turtle-human hybrid like Todd is able to make an easy six yards. First-and-goal!

— Tate around right end on second down, TOUCHDOWN! Yeah! Bring on Byrum! At least, I think it’s a touchdown. OK, so Tate might have stepped out. They’re reviewing. OK, so he definitely stepped out. Dammit. Can’t the officials make the call right the first time, so I don’t feel like I’m starving at a crowded restaurant where the hostess has just called my name for a table and it turns out she’s asking for a different Jerry? Huh?

— McCalebb somewhat curiously in on 3rd-and-1: stuffed. Ziemba with the missed block. Tate back in for 4th down. This is a must-go and a must-make for this offense. Handoff … he’s in! TOUCHDOWN! No replay needed on that one–massive hole this time in the UK d-line, and Tate might have scored on that if the ball had been out at the 30.

— And that’s your half, folks: 14-7 Auburn, and the home team has all the momentum. The way Auburn pulled away from La. Tech, Miss. St., West Virginia, and even Tennessee in similar situations makes me think we don’t have too much to worry about. I mean, what are the odds Auburn’s offense scores 7 points in a half again? There’s no way they score 7 lonely points after the break. I’d bet my house on it.

(How sad is it I’d have still won that bet?)