*** Joanne Lucci, who was a freshman during the 0-10 hell of 1950, tells Auburn fans to keep their chins up in a letter to the Montgomery Advertiser:

About the only thing we Auburn students and fans had that terrible football season was school spirit, but we had plenty of that. We had few chances to yell “Touchdown, Auburn!” so we substituted “First down, Auburn” and were thrilled when we actually made one!

*** Did you see? We’re having another contest — you can win two tickets to the Ole Miss game.  I’m going to go ahead and re-post the specifics:

Hey there Tiger fans! Thanks to Auburn Elvis’ sense of parental obligation (you could just take the boy with you to the game and trick or treat for chicken fingers outside the luxury suites), TWER has two tickets for the Halloween game against Ole Miss. The tickets are for Section 16, Row 36, seats 19 and 20 (near the student section, under the Yella Wood sign). That orange arrow may not be entirely accurate: click here to see the seating chart.

Do you want them? Do you want to watch Malzahn return the pink slip from the throne of rAUk ‘n’ rAUl royalty?

If so, here’s what you’ve got to do: Send to [email protected] an original Photoshop (or, you know, whatever program you use) graphicstoryphotomontagewhatever that tells the story, as you see it, of the 2009 season so far.

The only requirement? It must include some rendering (be it prominent or Where’s Waldo-esque) of Scary Houston Nutt: 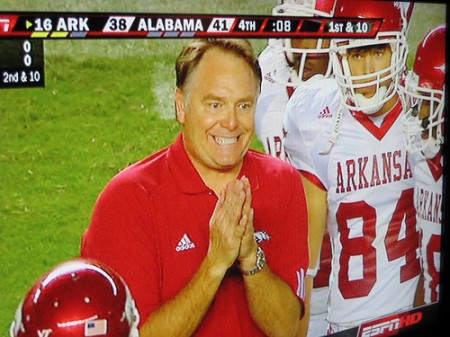 (Oh, and it must be suitable for publication on this site, whatever that might mean to you… and you’re name.)

The graphicstoryphotomontagewhatever creation will be judged on its AUsomeness by Jeremy, Jerry and J.M.

The winner will be announced Friday morning and can pick up the tickets the day of the game at Jordan-Hare’s will-call window.