1. The first time we played on Halloween was in 1903. It was against Sewanee. It was in Mongtgomery. It was a nightmare. AU 0 – Sewanee 47

*** This got lost in the depression of the weekend: Auburn High got their biggest win against Opelika in 30 years.

Also, um… Auburn is currently ranked #1 in the state.

*** Mother of pearl… The Auburner has created downloadable, assemble-your-selfable Halloween masks of the entire Auburn coaching staff. Jay Jacobs, too. I wonder if anyone will dress up as their self? – [JDH – 10:23 a.m.]

*** Seriously? You’re serious? You’re telling me that the screenwriter for “The Blind Side” found it to necessary to include “I find him extremely handsome” for Sandra Bullock’s character in reference to Nick Saban? And that that line is included in the recently released trailer for the movie?

*** Walt McFadden wants his money back.

If Trahan doesn’t pay up, me thinks we could see a more violent version of McFadden’s “Pompano Jook.”

*** Jennie’s comment on the similarities (I always thought he had that chiseled, Van Der Beekian look you want in a QB, but I suppose I can see tortured vampire)  + Halloween coming up + the best TWER comment ever:

Win or lose, I am marrying Chris Todd at halftime of the Iron Bowl…

… got me to thinking on all sorts of Photoshop possibilities. 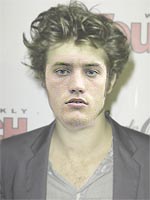 But we need someone — WBE’s ‘Friend of the Blog’ Rod a la The Toddening fame?? — to take it to the next level, preferably before Saturday.
Vampires (sucking the blood of the season? shoulder surgery = reanimated corpse? Dr. James Andrews as Dr. Frankenstein?).
Twilight (of Auburn’s season? Todd’s carreer?).
The possibilities are endless.
Any takers?
– [JDH – 7:15 a.m.]