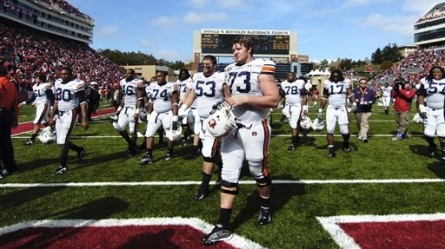 I know, I know, the defense wasn’t very good. It might have even been bad. But I swear to you the offense was worse. Consider: the defense was going up against a unit ranked 17th in the country, while the offense was facing defense No. 113. Consider that in the first half, when the game was decided–yeah, the 14-point swing after the Tate fumble moved the coffin lid into place and the Johnson kick return provided the final nail, but Auburn was pretty much dead as soon as the lead hit 24 points–that the defense succeeded in keeping Arkansas off the board 3-out-of-Arky’s-first-6 tries while the offense failed to score 5 out of their 6 (and eventually, 8/9).

But on top of that, consider that the defense was repeatedly just plain beaten–sometimes, guys like Ryan Mallett, D.J. Williams, and Michael Smith are just going to make plays. Very rarely this was the case for the offense, but more often–especially in the critical early going–the offense just beat themselves: false starts, dropped passes, missed blocks, errant throws. The question Auburn fans need to ask themselves after that performance was not “How can the defense get better?”, because honestly, it’s not. The question is “How can we keep this from happening to the offense again?”

So, where did the offense break down?

Not along the offensive line. I’ve seen a handful of Auburn fans excuse Chris Todd by saying that he didn’t have time and that his receviers didn’t help him … and while the latter is true (more in a second), the former is just plain false. It’s easy to remember the sacks, especially the ones in the fourth quarter, and easy to forget all the different times Todd ran a slow-developing play-action pass and still had all day to throw. To boot:

1. Only one of Arkansas’s three sacks came in the first three quarters, and it came on Auburn’s final drive of the first half; Hog pressure had very, very little to do with the offense’s struggles through the first 25 minutes.

2. Remove the sacks and the Todd fourth-down fumble, and Auburn averaged 8.8 yards a carry on the ground. Even if you take out the two 60-yarders (as Malzahn suggested we do this week), the Tigers still plowed out 5.3 yards a non-quarterback rushing attempt. That’s some fine, fine run blocking.

Somewhat, in the receiving corps. The hands were fine–Fannin’s drop on a swing pass was the only truly catchable ball that Auburn didn’t bring in all game–and Trott’s edge blocking is still tremendous. But Auburn would also repeatedly run play-action or roll Todd out, giving him all the time he ought to need, and no one would come open. This is two straight games where Adams and Zachery just haven’t been able to find a way to make themselves available, and it’s hurting Auburn’s ability to move the football.

At quarterback. That said, even if they’d been open, there’s no guarantee in this game that Todd would have found them … as we all know Zachery could tell us. That was the biggest misstep, but Todd had plenty of others–the shoulda-been-pick that Adams caught for the only first quarter first down, the wide-open Fannin on a crossing route that would have extended a second quarter drive, the misfires inside the Hog red zone on the first-half field goal drive, and of course those two end-of-game fumbles.

For now this is a total outlier of a performance and I fully expect to see the same Todd we saw the first five weeks reemerge tomorrow … but all that doesn’t change the fact that if Todd plays like this, I just don’t think Auburn can win.

Defensively, well, how weird is it that the linebackers were the strongest part of the unit? Even with Adam Herring continuing to be pretty much invisible expect for the times he’s getting crushed at the point-of-attack or bolting forward and taking himself out of a play, this is true: despite seeming to tire late, Bynes was the Auburn D’s best overall player in my opinion (since McFadden had to come out after the pick), and if Auburn could have used a few more big plays from Stevens he was also steadier than most of his teammates.

As for Herring, it feels weird to point-blank disagree with the positive statements Auburn coaches are making about him, and I’m not going to argue that he’s not giving it his all or making a tackle when a play happens to come to him. But as for him going to the play, I’m sorry, it’s just not happening, and there were multiple occurences during this game where he tried to make it happen and only ran himself out of position.

As for the secondary and defensive lines, well, things were rough. I think they both get a bit of a pass because of their respective depth issues and the offense’s inability to give them any kind of a breather, but this was each group’s worst outing of the season.

Along the line, Coleman wasn’t quite the nonentity the box score made him out to be–he forced Mallett into two early throws that I’m surprised weren’t scored QB hurries–but no one made any kind of real impact. The tackles were repeatedly blown back in rush defense, neither Coleman nor Goggans were consistently active (though Goggans made a handful more plays, to go with getting run at and sealed up more often, unfortunately), the pass rush as a whole was pretty much nonexistent, and the second-stringers save Carter provided nothing or worse. Bad all the way around, and next week I’m charting a “pressure” metric so I can quit watching four guys rush, all four of them get stonewalled, and know it doesn’t show up in the charting at all.

As for the secondary, McFadden was solid and Washington didn’t have any major issues that I found. But there were more downfield completions against Arkansas than aagainst Auburn’s first five opponents combined, Bates and Etheridge each had poor days in run support, and of course Thorpe never put his good positioning to the effect of actually breaking up the passes thrown in his man’s direction. Tough matchup facing an in-form Mallett and the Hogs’ cadre of receivers, but still.

Durst can do better. Most of the “-4” up there is thanks to the kickoff coverage and Fannin’s fumble, but even if the net ended up OK, a gross of just 39 yards a punt isn’t what we’ve come to expect from Saturn V. It looks to me like he’s trying to hang them up and prevent a return, which is a noble goal, but we’ve seen him get both sufficient hang-time to force fair catches and not leave them quite so short. Hopefully it’s a one-week thing (and in any case, it’s better than having them blocked).