Let’s face it cats and kittens: When in Auburn, one must conjure up his or her own darn fun at times, wholesome or otherwise.

Personally, I love to dork out on adolescent holiday rituals. I really love it. If such a position existed, I would be the President of the Auburn Christmas Carolers Coalition, no questions asked. But that is neither here nor there.

The loveliest season of all has finally arrived in our little village, and I am filled with glee.

The weather is delightful, the trees are stunning, and my favorite holiday is just around the bend.

Therefore, to celebrate this glorious time of year, I invited all the artists, freaks, friends, loved ones and their kids to join me and my beau at our humble Auburn abode for our First Annual Pumpkin Carving Party 2009.  When life gives you a squash, gut it and make a lantern out of it.

The history of carving pumpkins did not in fact originate from a pagan ritual like most people would like to believe. The practice actually evolved from an old Irish myth about a man named “Stingy Jack” who played a bunch of nasty little tricks on the devil. In fact, he was such a scoundrel, that neither the devil nor God himself would take him in the after life. Ol’ Stingy Jack is left to wander the Earth for eternity with nothing but a lighted piece of coal inside of a carved-out turnip. Poor guy. So to keep “Jack of the Lantern” and all the other evil spirits away, Europeans began carving scary faces into turnips and other various root vegetables and placing them in their windows and doors.  Naturally the practice followed them to America.

“Jack of the Lantern” was shortened to “Jack O’Lantern”, and, boom, a brand new American tradition was born, filled with wholesome, sticky fun for the whole family. Thank you, Ireland.

But here in the States the pumpkin became the vegetable of choice, not only because of its ample size and large cavity, but because the pumpkin is an indigenous fruit, originating in Central America. The pumpkin is, indeed, a squash and also a member of the family cucurbit, which includes other vine fruits such as cucumbers and cantaloupe. Also the pumpkin is a highly versatile ingredient in the kitchen and can be found in everything from soups, sauces and pastas to lattes, desserts and baked goods. I love pumpkins so much, I think I might want to wear one on my head. Just like Gus Clark of Fine Wine and Beer by Gus!!!!

Seriously readers, I don’t know how anyone could find scooping slimy strands out of a vegetable with your bare hands to be discomforting, but to each their own. I was just thrilled that Sunday my friends were all about getting down and dirty with me. By 4 o’clock it had turned into an exquisite afternoon with a house full of food and friends and a porch covered in pumpkins. We chatted for a bit and ate ham and homemade biscuits. Finally, we put the apple cider on the stove, spread some old copies of the Wall Street Journal about, and kicked off what turned out to be a veritable North Ross Street pumpkin-carving wingding.

It was great to see adults and kids alike having a blast and really getting into what they were making individually. Also, having the kids there was new for me, but it definitely brought an uninhibited element to our soiree that made it silly and fun. Kids created pumpkin hair, pumpkin vomit and oozing pumpkin brains out of slimy innards and seeds. Adults who had no desire to even carve a pumpkin were elbow deep in them by the end of the night. The football was thrown and a heap of pumpkin guts were too. Nothing makes a hostess feel better than seeing everybody eating, drinking and just having a great time.

The end result was a spectacular glowing attraction.  We arranged our jack-o-lanterns. We lit them. We all gathered to admire our work.

Cars slowed to a creep. We were all like kids again in my tiny front yard. I felt good.  It was a beautiful night on the Plains and I was so happy to be in Auburn. Why the hell not??  The air was cool, my friends were around, I had a hot toddy in hand and a lot of pumpkin in my boots.

Hail to the pumpkin: my favorite squash ever. 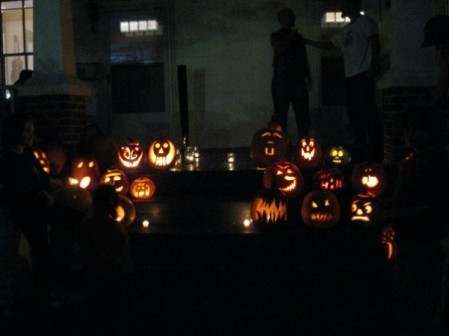 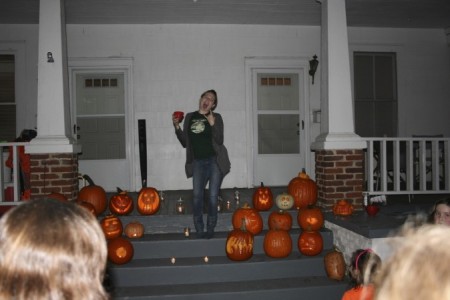 Photos by Wayles and Leigh.