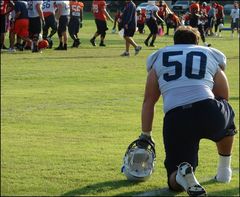 Second quarter, three Saturdays ago now, West Virginia driving. Auburn catches a break: there’s a flag. Chop block, on the Mountaineers. And the ears prick up, because they always do these days when chop blocks and Auburn are in the same sentence.

A couple days later I rewatch the game and pay special attention to see what kind of infraction we’re talking about here. Coleman is the victim: he comes tearing around left end with the WVU tackle slow to react. Noel Devine has been assigned to help on that side; with Coleman untouched and Devine apparently one-on-one, he rolls for a legal cut block. Unfortunately for both Coleman and the ‘Eers, the tackle has recovered and engages Coleman high an instant before Devine makes contact with Coleman’s legs. It was dangerous, illegal, worth every bit of 15 yards–but also very obviously an accident.

As soon as the referee last Saturday announced that the Auburn player responsible for the first-quarter chop block against Tennessee was Ryan Pugh, I was praying that when I came back to this game and watched this play again, I’d see something similar. Something I could excuse.

I have watched the play a dozen times. I have watched it in real-time, slow-motion, and frame-by-frame. And this is what happens: the entire Auburn line stands up in standard pass protection. Tennessee rushes four and does not slant: the two DTs on Auburn’s right are picked up by Bart Eddins and Andrew McCain, the two left DTs, including Wes Brown, picked up by Mike Berry and Lee Zimeba. There is a beat, a moment in which Pugh is unengaged and free to double-team one of the tackles to either side. What Pugh does–as the other four Auburn linemen remain perfectly upright throughout the play–is fall, leading with the left shoulder, into the side/back of Brown’s left leg.

What we can say with absolute certainty about this play is this: this is a horrible, horrible football play. It couldn’t be more obviously illegal, and was committed in full view of an official not three or four yards away. It was the offensive line equivalent of a wild defensive end going helmet-to-helmet with a quarterback four seconds after the ball has been thrown. Equally obvious was that the line call was not to cut-block: it makes no sense for four of Auburn’s linemen to protect straight-up, including on the defensive ends, but for one of the tackles to get cut. Either Pugh was inexcusably confused about the call (as the center, I think the odds of this are low) or he simply ignored it. Either way: he singlehandedly ended a promising drive that would have given Auburn the lead.

(In the interest of complete disclosure: there is also the slim, slim possibility that Pugh tripped. It’s impossible to keep track of interior linemen’s feet from the only angle provided–no replay. But I can’t believe that Pugh managed to trip himself into Brown, at the perfect angle to bring him to the ground. We’re talking bad movie-script levels of coincidence there.)

What we can’t say with any kind of certainty is what Pugh was thinking. Maybe he was confused about the call. Maybe he knew Brown was carrying an injury into the game and had coldly decided beforehand to try and exacerbate the injury*. Maybe it was what the British soccer press (or Coldplay) would call “a rush of blood to the head.” Maybe he was just trying to make a block and forgot everything he knew about proper technique for a second. It was stupid, no debating that, but was it malicious? “Dirty?” Just a poor decision? No one knows. Vol fans don’t know, Auburn fans don’t know, you don’t know, I don’t know.

Here, however, is a list of things we do know:

— The week before, against Ball St., an Auburn ball-carrier had been swarmed under along the sideline and the play was effectively over. A Ball St. defensive lineman was jogging halfheartedly towards the play, and just before the whistle blew, Pugh lowered his shoulder forcefully into the BSU player and knocked him to the turf. The BSU player did not get up immediately, required the attention of the training staff, and was forced to leave the game for a period of time. (Brown, you may know, also left the game for a time, meaning that two opposing players in two weeks have been forced to leave the field after plays by Pugh. This is a fact.)

Because the play was live and the “block” was from the front, the play was technically legal. It was also unnecessarily violent, unsportsmanlike, at risk for drawing a flag under the “unnecessary roughness” statute, and–to sum–the sort of play that would have had Auburn fans roaring for blood if it had been committed by an opposing player. (As an aside: I find it much less defensible than the chop block against Tennessee.)

— In last year’s Iron Bowl (with the game long since decided), as a play commenced downfield, Alabama defensive lineman Luther Davis began to stand up with his back to the Auburn line. Pugh then dove into the back of his legs. I wrote at the time:

If Pugh wanted him blocked, it would have been the easiest thing in the world to run over and give him a shove. He doesn’t. It’s as filthy a play as you can see on a football field. Whatever condemnatory adjective you’d like to use here–unacceptable, inexcusable, unjustifiable, reprehensible–is appropriate. To borrow a phrase from election season, the JCCW rejects and denounces this kind of filth. There’s no place for it at Auburn.

Harsh as it is, I  stand by every word of that.

— Pugh was also called for a chop block in the 2007 Chick-Fil-A Bowl that forced a Clemson defensive lineman from the game for the duration. I feel that this play (as with the infamous Glenn Dorsey chop block committed by Chaz Ramsey earlier that season) could be reasonably explained as an accident, but facts is facts: this is another opposing player we’ve seen sent to the sidelines after a play made by Pugh.

I list all this information to say this: I repeat that I do not know why Ryan Pugh chop blocked Wes Brown. No one does. But I will not blame anyone who does not give Pugh the benefit of the doubt–because I do not feel that Pugh has earned it. We don’t know enough about who Ryan Pugh is or why he has done the things he has done in an Auburn uniform to call him “a dirty player” or a “thug” or any other of the various epithets that have been attached to him by rival fans. But we do know this: Pugh has been a violent player whose actions have directly caused Auburn’s opponents an abnormally high number of injuries. That much is not up for debate.

I cannot tell you how much I wish this wasn’t the case. I despise having to write a post like this. But it has to be written, because I cannot in good conscience ignore a problem like this. Ryan Pugh cannot continue to commit dangerous penalties, display unsportsmanlike behavior, and endanger the well-being of our opponents while he represents Auburn University. Cannot, cannot, cannot.

So, how do we fix this problem? I don’t know. Teach Pugh proper blocking technique? Punish him with suspensions or other team-imposed sanctions? Combination of both? Neither? Not only does it not matter what I suggest, I genuinely do not care what Jeff Grimes and Gene Chizik do about it**–just so long as it works and we do not have this conversation again. I am not angry as much, I am not disappointed as much as I am just sick to death of it. I just want it to stop.

I am an Auburn fan. This means I root for all of Auburn players to play well, outperform their opponents, and win. I will be rooting as hard for Ryan Pugh this Saturday as I always have, and will. But I am the sort of fan who roots just as hard (well … I can be honest, almost as hard) for Auburn’s players to play with honor, respect for their opponents, and sportsmanship. Those things matter at Auburn, and it hurts when our players perform as if they don’t.

* For the record: I cannot believe that this is the case.

** Something public and forceful to combat the growing “Auburn is dirty” sentiment would be nice, sure, but we all know this staff doesn’t do “public and forceful,” and that’s fine. I don’t care, so long as it works.